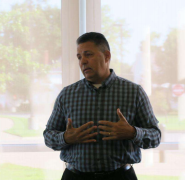 ASHLAND - In the wake of a June shooting that left a man dead and a woman injured at Almond Tree Inn, Transformation Network has begun to implement a series of changes at the property.

Transformation Network founder and president Dan Phillip said while he does not feel his organization is to blame for what happened two months ago, the incident did prompt the organization's leaders to say, "We can do better."

Phillip spoke to members of the Ashland County Homeless Coalition Wednesday to share his organization's plans and to solicit feedback from the social service providers and other stakeholders at the meeting.

Already, the organization has installed six security cameras on the property and performed extensive tree-trimming to bring more light and increased visibility to the area around the inn. Additionally, Transformation Network is beginning to implement operational changes designed to add accountability for tenants.

Though Almond Tree in has a license to operate as a motel, it primarily serves as short-term rental housing for a transitional population-- people who may have been homeless and are working toward a more stable living arrangement. Rent is $140 per week or $480 per month, with local social service agencies receiving a discount for placing tenants at Almond Tree.

Prior to the shooting, Transformation Network provided little guidance and oversight for tenants. Now, Phillip said, the organization wants to make the housing program "less transactional and more transformational."

To that end, tenants are now asked to sign an agreement promising to abide by a set of rules. In exchange, tenants who meet the expectations laid out in the agreement are reimbursed $80 per month. That money can be put toward rent for the following week or month or can be paid out as cash.

Though there are no restrictions as to how the reimbursements can be used, Transformation Network's Wayne Mullet said he hopes tenants will choose to set money aside to prepare for housing arrangements. Many tenants must come up with a security deposit and two months' rent in order to move out of Almond Tree into a longer term rental property.

Under the new agreement, unemployed residents are required to:

provide proof of their job search, demonstrating they pursued three valid job openings each week
participate in an assigned "job duty" at the inn as assigned by Almond Tree Inn

All residents, regardless of employment status, must:

keep their room clean
participate in a life skills class for one hour each week
have only approved visitors and have no overnight visitors or visitors after 10:30 p.m.
follow all house rules
sign a form consenting to a criminal background and credit checks
Mullet said the life skills class is not about covering a certain curriculum but about meeting residents where they are and helping them move forward. Mullet will meet with each resident one-on-one to talk about their lives and their progress.

All 18 residents at Almond Tree have signed the form, and none have been hesitant to do so, according to Mullet.

"They are open and receptive to this," Mullet said. "They are broken. They're hurting, and they actually want help."

The new rules and regulations for Almond Tree Inn is just Phase I of a seven-phase strategic plan being developed for Transformation Network's housing program. The plan includes the possible expansion of Almond Tree Inn.

Phase II of the plan involves remodeling the upstairs of Transformation Network's 1310 Claremont Ave. building into a sober living apartment, housing two to four men who will participate in the organization's Second Chance Program.

Phase III is to explore the possibility of bringing an Employer Resource Network to the community and hiring a success coach to serve as a fee-based shared resource for employers to improve retention and productivity.

In Phase IV, Transformation Network would build an addition to the front of the existing Almond Tree Inn motel rooms. The new facility would serve as a hub for Almond Tree housing programs and would include living quarters for an on-site director as well as a kitchen, laundry room, meeting room and living room.

Phase V would involve acquiring properties on the north, east and south sides of Almond Tree Inn to be used for parking and as the site of a new Transitional Work Facility.

As Phase VI, Transformation Network is considering adding independent apartments near Almond Tree Inn as a next step for people transitioning out of the "transformational housing" in the motel property.

Finally, in Phase VII, Transformation Network would purchase and remodel older homes and then resell them on no-interest land contracts to people living in the apartments.

The seven-phase plan is not set in stone and may be modified based on feedback from the community, Phillip said. Transformation Network is to announce more details to the community at a press conference in September.

Phillip encouraged anyone interested in getting involved in the project as a volunteer or donor to contact Transformation Network at (419) 207-1188.

Tags: in the wake of a june shooting that left a man dead and a woman injured at almond tree inn, transformation network has begun to implement a series of changes at the property.
« Back to General News Releases